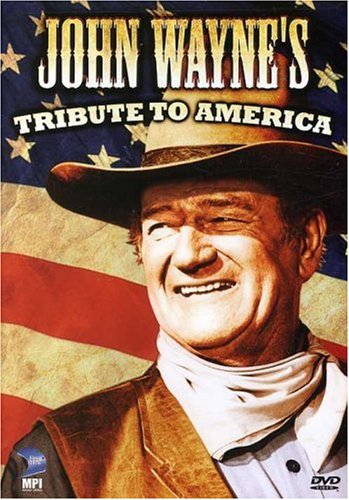 John Wayne's first television special, originally aired as Swing Out, Sweet Land on NBC-TV in 1970, is a patriotic and poignant journey through American history -- with music, comedy and many famous friends.

Also: Dean Martin as inventor Eli Whitney; Michael Landon as Peter Minuit, buying Manhattan Island from an Indian (Bonanza co-star Dan Blocker); brothers Rick and David Nelson fighting on opposite sides in the Civil War; Phyllis Diller as a 19th-century Presidential candidate; Dan Rowan and Dick Martin as the Wright brothers; Celeste Holm and Dennis Weaver as the parents of young Abraham Lincoln; Greg Morris as Crispus Attucks, a Negro who died in the Boston Massacre.

Musical highlights include Ribbon Of Steel by Johnny Cash, This Is A Great Country by Glen Campbell, Oh, Susannah by Roy Clark, Clementine by Leslie Uggams and God Bless America by the cast.

JOHN WAYNE'S TRIBUTE TO AMERICA is a lavish and thoughtful timepiece of 20th-century television entertainment, presenting a parade of legendary stars in a humorous and hopeful celebration.

As an amazing time capsule of all-star entertainment, John Wayne's Tribute to America provides a perfect snapshot of American television in the year 1970. Under its original title "i"Swing Out, Sweet Land, this Emmy-winning variety show was originally broadcast on NBC on November 29, 1970, and was intended, in part, as John Wayne's personal response to growing protest against the war in Vietnam. Three years after the hippie movement's "Summer of Love," the country was politically divided like never before, and this 80-minute special was Wayne's attempt to counteract the "anti-American" war protests with a rousing, patriotic, and unifying reminder of America's greatness. In his introduction, Wayne (whose controversial conservatism ran against the rising tide of liberal politics) promises that the show will be apolitical and "short on preaching," focusing instead on America as "one of those yarn-spinnin' places"--a proud land of immigrants where people didn't take themselves too seriously, and where courage and nobility were mixed with song, dance, and humor as the country expanded westward. Swing Out, Sweet Land then kicks into high gear, with Glenn Campbell singing "This Is a Great Country" (from Irving Berlin's final musical, "i"Mr. President), followed by a veritable who's who of veteran entertainers, singing songs, telling jokes and appearing in historical sketches that unabashedly express Wayne's pro-American sentiments. As a tuneful history lesson, the program won an Emmy award for Dominic Frontiere's outstanding achievement in musical direction.

For some viewers this will be a welcome trip down memory lane, or a nostalgic reminder of a kind of patriotic spirit that had grown increasingly old-fashioned even in 1970. Others will see it as a perfect target for the kind of variety-show spoofs that were later perfected on SCTV. No matter how you perceive it now, Swing Out, Sweet Land offers an abundance of one-of-a-kind highlights, like Bing Crosby playing Mark Twain; Roscoe Lee Browne as Frederick Douglass; Ann-Margaret dancing up a patriotic storm; William Shatner doing some "serious acting" as John Adams; Lucille Ball as the voice of the Statue of Liberty; George Burns poking fun at Jack Benny in a hilarious walk-on cameo; Ricky and David Nelson as Confederate and Union enemies; Johnny Cash billed as a "locomotive troubadour," singing a flawless rendition of "Ribbon of Steel"; and Bob Hope doing his war-time comedy act... at Valley Forge! That's just a sampling of the stars on hand for Wayne's salute to America, along with a ghost-town sketch that qualifies as a kind of early farewell to Wayne's established Western persona. And while most of Swing Out, Sweet Land now looks impossibly quaint and dated, it's more than worthy of DVD revival as a memorable TV footnote to Wayne's big-screen career. The original 1970 broadcast was sponsored by Anheuser-Busch, and as a bonus feature the DVD includes the show's original commercials for Budweiser beer, one featuring Wayne and Ed McMahon. Also included is an archival clip of Wayne promoting his then-new film The Alamo while appearing as the "mystery guest" on a 1960 episode of the popular TV game show What's My Line? "i"--Jeff Shannon

You have been selected for a survey
We appreciate your feedback!